The Central Pacific's first locomotive, the C.P. Huntington, is on display in the California Railway Museum in Sacramento, California.

This loco was built in New York in 1864 and shipped to California around the Horn. As a single driver it's highly unusual in the US and has a unique charm of it's own. I've often stood gazing at the engine and wondered why there are so few models of it in circulation.

It turns out that a model was produced, back in the very early days of garden railways, by Delton Locomotive works in brass and to a very high standard. These models were expensive at the time and today sell for very high prices on the rare occasions that they come up. Back in the 1980's Delton set a trend in compromising scale for compatibility in G scale models that has persisted to this day. Although the CP Huntington was produced in 1:24 scale to match European imports, it actually ran on G Scale, or 45mm, track which equates to approximately 3' 3" gauge in full size. But the prototype is Standard Gauge! To accomodate this, Delton's model was narrowed in width, while maintaining a semi scale outline.

To our English eyes, this butchering of scale is nonsense, but I have to say the resulting model has a delightful appearance that doesn't clash with the eye in the way that sub-scale models of British prototypes always do. Anyway, all subsequent 'CPH' models seem to have followed the same trend and the compromise works well with commercial 3' gauge stock from Bachmann and others.

My model, acquired at a UK trade show, is of fully brass construction in 1:24 but not, as far as I can tell, a Delton. The fact that it is unfinished and assembled with BA hardware points strongly to a UK origin. The brasswork is superbly cut and must have been made by NC or pantograph tooling. It might relate to a Delton origin, but there are detail differences that point to a parallel design. I'd love to know more about it and if there are any more in existance, but no amount of Google searching finds it.

The boilers of early American locomotives were often clad in what is known as 'Russia Iron'. In the days before rolling mills were able to roll thin sheets, Russia Iron provided a practical but probably expensive solution. It is the blue - gray colour of this material that is so often imitated in the boiler cladding of models and restored locomotives with colours varying from sky blue to silver. It's a highly emotive and sometimes controversial subject!

Russia iron was made by hammering thin sheets of wrought iron into ever thinner laminations in the presence of oil so that the oil became trapped in the material, eventually down to about .025" thick. While the resulting colour was rust resistant due to the embedded oil, it also took on a lustre that's difficult to reproduce nowadays. I'm very fortunate to possess a small sample cut from the (believed to be) original boiler lagging of the locomotive 'Glenbrook', built in 1875 for the Lake Tahoe Railway and restored to working order by the Nevada Railroad Museum in Carson City in 2015. The sample was given to me by the Museum director and still carries the planishing marks left y hand hammering all those years ago.

It's not silver, or sky blue, it's a dark blue-gray, closest resembling the modern RAL2008 paint colour. And that's the colour the C.P. Huntington's boiler will be! 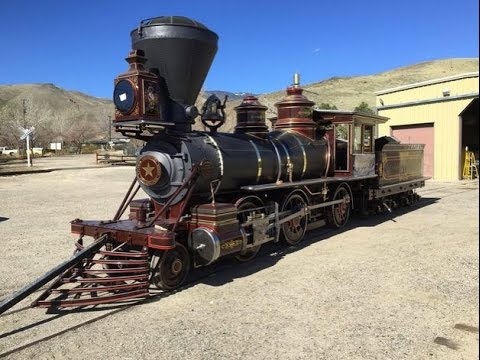 'Glenbrook' in 2015, a contemporary of the C.P. Huntington built to bring timber down from Lake Tahoe to the Central Pacific main line. Shown under restoration in 2012 and complete in 2015.